Ants have three main types of suicidal defense mechanisms. Firstly, the ants can essentially 'blow' themselves up in a process called autothysis. This is where an ant will contract its abdominal muscle that surrounds a gland. This gland will then burst, spraying a toxic, sticky substance everywhere that can kill and/or immobilize its predator.

The second defense mechanism is where one to eight worker ants, will shut themselves out of the nest at night. This will prevent nocturnal predators from infiltrating the nest and it basically means that the ants are committing suicide because they rarely ever survive outside through the night. 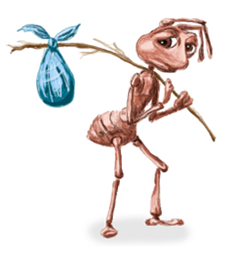 The third suicide defense mechanism is a preventative strategy. When an ant can feel itself getting ill from some type of pathogenic disease, it will leave the nest and go and die in isolation, in order to prevent the rest of the colony getting ill.
Posted by Thetna6 at 23:22 0 comments

Ants are social animals. They live in a highly organised hierarchical society. The mating ritual between ants is very brief. Firstly, the queen ant gives birth to several eggs which then go on to become worker, soldier, males or young queens. The workers are mostly sterile, however, in the summer, the young queens and males are released to mate with other ants. Once the mating has occurred, the male ant soon dies and the young queen then goes to start her own colony. This is where she will lose her wings, either through ripping them of as a source of nutrition or her worker ants will chew them off for her.

Ants have several predators, therefore, they have adapted several defense mechanisms and strategies to protect themselves against their enemies: 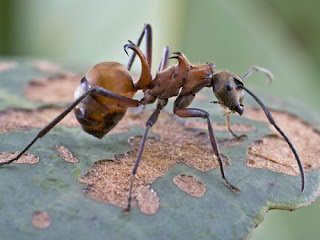 The fishhook ant can use its sharp spikes on its back to penetrate their enemies. It can also use these hooks to interlock with other ants in the nest. This means that the ants will form a sort of lattice which will prevent the ant from being dragged away by a predator.
Posted by Thetna6 at 23:03 11 comments

There are several animals that prey on ants. So much so, that they have been given the name myrmecophages, which literally means ant eater in Ancient Greek. Several insects, rodents and birds are opportunistic predators of ants which means they only eat Ants if they are given the opportunity.

However, some animals rely on ants for their dietary needs. The large mammal, ant-eater even has a body that is adapted for breaking into ant nests. It has a long snout and sticky tongue, which makes it easy to suck ants out from tiny holes. It also has sharp claws and strong forelimbs to help it break down the ants nest.

One unlikely predator of ants are black bears. It may seem silly for such a large animal as a bear to eat tiny insects such as ants. However, ants are social creatures and can live in nests from only a few members all the way up to a million members. This means that if a bear breaks into an ants nest, it can find several ants at a time, therefore, providing it with a large and nutritious meal.
Posted by Thetna6 at 22:51 0 comments

I remember watching this documentary last summer when it first came out. It is such an interesting depiction of ant life and is definitely worth the watch.

The ants may also feed the plants in a process called myrmecotrophy. This is where, the ants live on the plant, in the domatia. When the ant is living here, it produces piles of excrement and waste, which acts as nutrients for the plant.
Posted by Thetna6 at 22:19 0 comments

I believe Ants are very fascinating creatures, they have a number of attributes, which makes them unique insects. Firstly, Ants can lift up to 50 times their own body weight! This is the equivalent of a fully grown man carrying a truck, with his teeth. 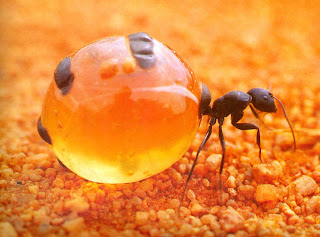 Thirdly, Honeypot ants are eaten as a delicacy. These ants have large swollen stomachs full of nectar. This storage of nectar acts a emergency reserve for the colony during times of drought. The aborigine people of Australia eat this ant as a sweet because of the high amount of nectar.
Posted by Thetna6 at 22:35 2 comments